Lot’s of work on Landlord’s Super this month. As we get closer and closer to the Early Access release, you can expect to see more and more delicious content.

We’ve also been guest appearing on a podcast about Game Development, but it’s not out yet, so shhh…

Oh, check out these 5,000 images of car parks from Sainsbury Archive. They’re amazing.

To end the month we added more detailing to the Seasons & Dynamic Weather in Landlord’s Super. Autumn and Winter got the most love, with autumn leaves filling the world with reds and yellows. Winter is the stand out effort though as the temperature drops into the shivering minus values and the world of West Berklands’ freezes over. If the weather permits, it might even snow and you’ll be playing in a real winter wonderland. Greg tweeted an accelerated example of this weather scenario below. Remember, this is all dynamic, once the temperature rises above 0c then the ice and snow will begin to melt away, and the dead trees will reveal themselves once again.

Greg joked over on twitter that – as the game is set in the UK – the first sign of snowfall should stop all vehicles (including your own deliveries) from functioning… We think it’s not only a fun poke at the UK’s inability to deal with snowfall, but also an interesting mechanic. What do you think?

You can view a better quality version of the above video over on the MinskWorks Discord.

Most of January was spent making sure the on-boarding for the game is at a point where we’re confident players can enjoy the game without needing to refer to an online guide or wiki (Though we do hope the community works together to build a wiki as there are many, many hidden mechanics in Landlord’s). Unlike most open-world games, Landlord’s Super is designed to be fully player driven. There’s no mission structure or markers on a map to follow, all actions and goals are player driven. If the player want’s to work on bricking up the house their very first day? Sure, they need only get their hands on the tools and supplies needed. Likewise, if the player wants to earn a few bob on their first day, they can head straight for the job centre and start searching for work. Such an open design means it’s easy for players to feel overwhelmed or without direction. We’re hoping the notebook can help alleviate these fears for some players, while others can just simply ignore it and go about their business.

We felt the Cement Mixer was too expensive for such an essential early game item, so we created a cheaper variant, the Hand Mixer!

The Hand Mixer is much cheaper, but requires the player use up energy to get a mix together, it also looks a little dodgy…

We’ve also been having a lot of fun stacking objects around the world into our wheel barrow, and then rolling them down to be used on the house…

Ruta did a speed paint! This is a video of her working on the texture for the fruit machine in the Anchor Tavern. Name and design were hers, as you probably guessed…

Discord community Scotsman and all around great guy, Bear-In-The-Air made a fantastic new emoji to better reflect the Jalopy play experience…
It’s a flipped variant of the original Laika emoji by DIOOOH.

Jalopy in the Scottish Sun

Stuart Cullen did a great writeup of Jalopy on Xbox One for the Scottish Sun. You can have a nose over here. 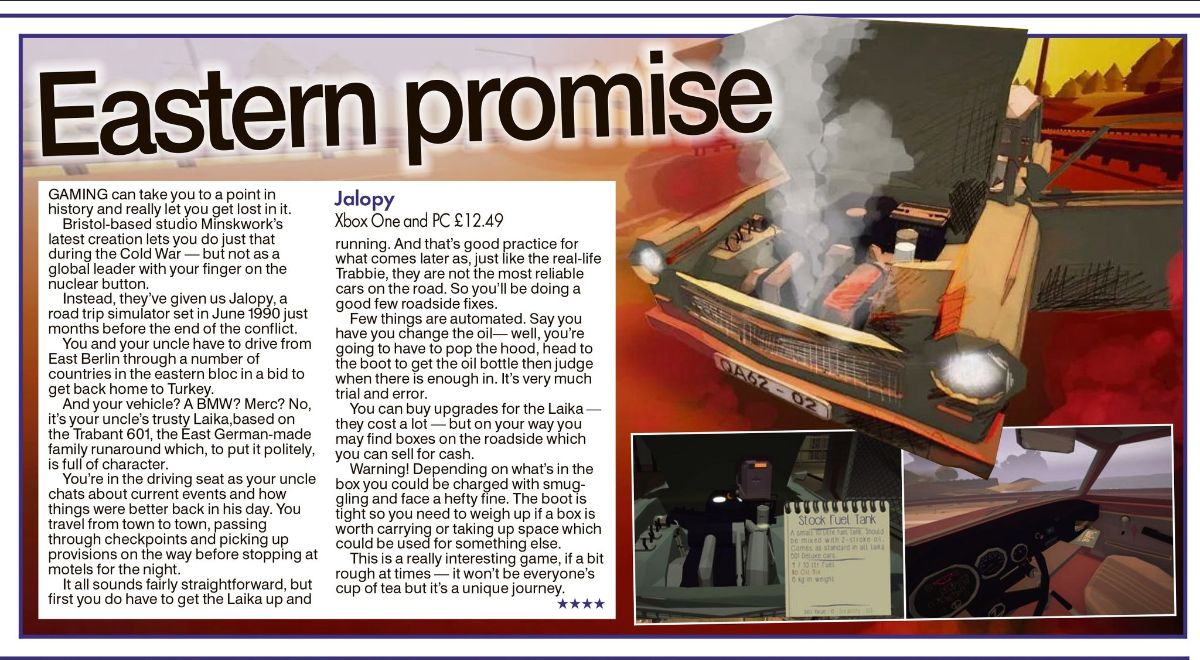 Thanks again for your continued support. If you haven’t already, be sure to Wishlist Landlord’s Super, follow Ruta & Greg on twitter, and join the discord!

Next month is a shorter one, but hopefully you can expect to see some of the Rental gameplay loop.If it’s not up to mustard though, we’ll have plenty more for you. Maybe even a podcast or two?

Till next month,
Ruta & Greg